Sensors vs Transducers | a Comparison

Sensors vs Transducers | a Comparison

The electronic world has a lot of complexities, but these allow it to have a broad industrial scope of recognition. Technology devices and parts have become an essential aspect of every business activity. It may be a simple everyday device for internal company communication, such as mobile phones or large equipment for manufacturing products. Every sector can most likely find something to relate to and connect with due to the versatile functions of electronic components and devices. This is why it is crucial to differentiate sensors from transducers.

Despite the industry’s frequent involvement and dominant presence on multiple applications, the market does not fully understand specific devices’ differences. As a result, some cannot avoid but confuse one with the other, especially when they are identical in appearance. Electronic components manufacturers solve this by having their product design part of their unique selling point. Regardless, the function of a component never changes or is instead actively being developed according to the market’s demand.

The dilemma is not a general attribute for the products and services of the electronic industry. Its complexities also refer to variations branching out to an endless list of categories and classifications. Some electronic products fall into the same class with almost similar functions and extend to different kinds, like sensors and transducers. So this article will help in reducing the confusion on these components. We will not immediately identify the difference between sensors and transducers but instead understand their functions first.

Get To Know Sensors and Transducers

A transducer is an electronic component that converts energy from one form to another, and there are two types of it. The first is an Input Transducer, a sensor that takes physical energy and converts it into a readable form of an electrical signal. An example is a microphone, where physical sound waves convert into signals transported through the amplifier’s wires. The input transducer has a sub kind called a ‘pressure transducer,’ also called a ‘pressure transmitter.’ It converts the physical energy into an analog signal by exerting pressure on the strain gauge to determine the production of electrical resistance. A strain gauge is a vital electrical technique tool for measuring mechanical quantities.

Transducers are electronic components that convert energy from one form to another, and there are two types of them. The first is an Input Transducer, a sensor that takes physical energy and converts it into a readable form of an electrical signal. An example of this is a microphone, where physical sound waves convert into signals transported through the amplifier’s wires. The input transducer has a sub kind called a ‘pressure transducer,’ also called a ‘pressure transmitter.’ It converts the physical energy into an analog signal by exerting pressure on the strain gauge to determine the production of electrical resistance. A strain gauge is a vital electrical technique tool for measuring mechanical quantities. 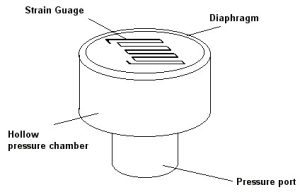 As we have an input, there is its opposite and the second type of transducer, which is the output transducer. Also referred to as an ‘actuator’ and functions the other way around, starting with the electrical signal. Some great examples would be a lamp that produces light and a motor that only performs when electricity is provided.

A sensor is a comprehensive electronic product category with different classifications, but its primary function is to provide a signal output to an input quantity. However, let us first clarify that the input is not similar to that of the transducers sourced externally. Instead, a sensor pertains to a more extensive system providing its leading control network like a microcontroller, a small computer on a single MOS Integrated Circuit chip.

In simple words, a sensor converts signals from one energy domain to an electrical field. To further understand, a great example would be the Light Dependent Resistor (LDR), where the resistance is contradictory to the light that falls on it. The greater the light, the lesser the resistance, and vice versa hence the creation of the ‘Light Sensor.’ A device is used to check the voltage drop and calibrate it to the amount of light falling.

The image below displays just some of the many kinds of sensors offered by electronic components manufacturers to different industries. There is no definite list, especially since electronic companies provide custom design solutions to fit their market needs.

Regardless, we still managed to gather a couple of primary sensor classifications, and the first identifies whether a sensor is active or passive. Active Sensors require external power signals, while Passive Sensors directly generate output without any signals. The second is based on the input and output conversion, including but not limited to Photoelectric, Thermoelectric, Electrochemical, Thermooptic, and Electromagnetic. Last but not least is determined through the output of a sensor, either analog or digital.

What Is the Difference Between Sensors and Transducers?

Now that we have individually explained both sensors and transducers, it’s time to determine their similarities and differences closely. Electronic components manufacturers like Honeywell would typically have them available in their product list as they have identical functions and belong in the same category. Both are used to convert an energy input into a more appropriate electronic output for a device or equipment to work.

A transducer is often regarded as a kind of sensor but considering that it has a more general energy conversion task than a sensor, it is more likely to be the other way around. Nonetheless, distinguishing which belongs to which is not that necessary. What’s more important is to understand that a sensor acts as a detector while a transducer is a translator that can sometimes require a sensor to perform the said task.

No one, not even electronic components manufacturers, can clarify the general identification of sensors and transducers. They are often taken and presented together, for they have similar functions and sometimes need the support of the other. We currently live in a world where change is inevitable, so flexibility is fundamental to remaining relevant and coping with the market. Articles like this are just a way to present the essential information and the difference between sensors and transducers, so hopefully, you already know better about them by now.

If you are looking for a sensor or a transducer, you may contact us on any of the following channels:

If you want to find more new about electronic components, please check out the following articles:

How Challenging 2022 Was For Electronic Components Distributors and What’s Ahead in 2023?

When Do You Need An Authorized Distribution Partnership?

We specialize in the rapid delivery of electronic components to contract manufacturers and OEMs across the globe in a wide variety of industries.